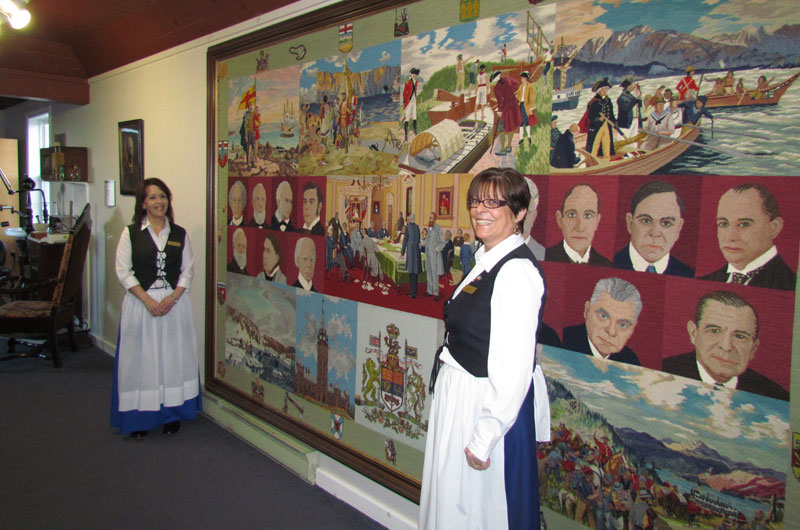 Elizabeth LeFort learned rug hooking from her mother at a young age. She continued to develop her own skills, experimenting with composition and colour. LeFort’s process later included hand dyeing all her own colours for designs that she sketched. Initially she worked in landscapes, drawing from existing photographs and illustrations. Particularly skilled at replicating photographs, LeFort was the first to create highly detailed portraits with wool. Some of her most known works include portraits of Pope Pius XII, President Eisenhower, Queen Elizabeth, President John F. Kennedy, and Prime Minister Pierre Elliott Trudeau … LeFort’s work is held in the Vatican Fine Arts Gallery, the White House and Buckingham Palace.

Her work has been shown in Toronto, Montreal, St. John, Moncton, Sydney, San Diego, Phoenix, and other places. The Dr. Elizabeth Lefort Gallery, located in Chéticamp, Nova Scotia, holds the largest collection of her work, including “The Crucifixion” which spans 3m x 1.7m and required the dyeing of some 510 colours. She was appointed a member of the Order of Canada in 1987 and received an honorary doctorate from the Université de Moncton in 1975.
Elizabeth’s piece titled Canadian Centennial 1967 features 416 colors, was 8 months in the making, used 7 miles of yarn and has 1,750,000 stitches hooked. The tapestry measures 3.2m x 2.0m (68 sq. ft.).